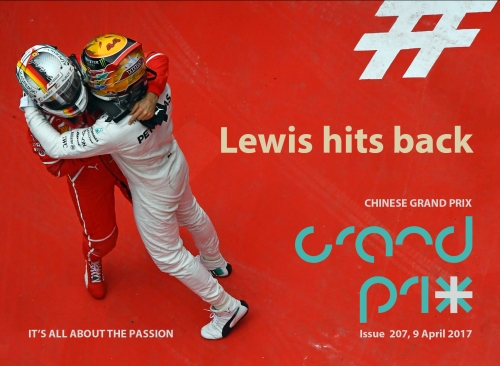 The Chinese Grand Prix was a terrific battle between the Mercedes of Lewis Hamilton and Sebastian Vettel’s Ferrari, with much interest as well further back in the field, where Max Verstappen pulled off an extraordinary race, starting 16th on the grid and racing through to third place. The result means that Vettel and Hamilton are equal on points as the F1 circus heads to Bahrain next week. Mercedes leads the Constructors’ Championship by a point because Kimi Raikkonen finished only fifth.

– We chroincle the amazing life of Tony Rolt

– The Hack tells stories of China, Piquet and Channel 4

GP+ is the fastest F1 magazine. It comes out before some of the F1 teams have even managed to get a press release out. It is an e-magazine that you can download and keep on your own devices and it works on computers, tablets and even smartphones. And it’s a magazine written by real F1 journalists not virtual wannabes… Our team has attended more than 2,000 Grands Prix between them. We’ve been around the block a few times and we know the history of the sport and we love to share it all with out readers at a price that is a real bargain. We believe that by attracting more people at a sensible price we can achieve so much more than all those who exploit the fans. In 2017 you’ll get 22 fabulous issues for £32.99, plus the 2016 season review completely free of charge.

For more information, go to www.grandprixplus.com.