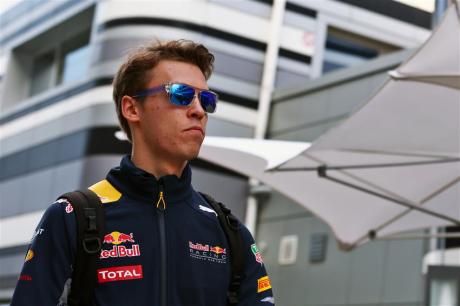 Dany Kvyat received a time penalty and license points for his first lap misdemeanours at this weekend’s Russian Grand Prix. But should it have been more? Some are calling for the Red Bull Driver to be parked. Some are calling him reckless whilst holding firm in the belief that Sunday’s mistakes could cost him his place at the team, and ultimately could spell the end of his F1 career.

But Kvyat’s own instincts and personal recollection of the first three corners of Sunday’s contest, and his role in the incident which ultimately brought an early end to Sebastian Vettel’s race, do hold merit. The evidence, while not removing the burden of responsibility from Kvyat entirely, does throw up some interesting and mitigating circumstances. With a calm head and the benefit of hindsight we will look at why.

First, though, I want to start in China. Dany Kvyat made a brilliant start, shot up the inside of Sebastian Vettel and made a clean, gutsy pass for position. The Chinese Grand Prix should not even enter this conversation and yet it has already been brought up in some quarters as evidence of his supposedly reckless abandon on the opening laps of a Grand Prix. It was a great move, complained about only by those who’d failed to defend against it. End of story.

And so to Russia. I am going to break this down piece by piece so that we can see exactly what went on and how each part of the puzzle was formed.

The overhead shot of the run down to Turn 2 shows the funnelling effect of the track. Kvyat is boxed in but in a perfectly good position. He brakes late, and admitted locking his rears to such an extent it felt as though he was being pushed from behind. Replays show, of course, that he flew into T2 under his own steam. A small lock up of the front right, and he punts the Ferrari of Sebastian Vettel. 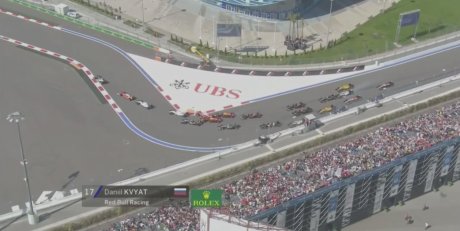 As Vettel’s car is pitched sideways it makes contact with Daniel Ricciardo, who himself is then pushed into Sergio Perez. Although we don’t know this at the time, the damage to Perez will play a significant role, as the contact has been with his rear right tyre which will soon let go.

Ricciardo runs wide, at T2, as does Lewis Hamilton who, seeing Kvyat, Vettel, Ricciardo and Perez all make contact to his right, has no option but to take avoiding action, miss the T2 apex and head for the re-entry point determined by Charlie Whiting on the left of the polystyrene bollard on entry to T3. 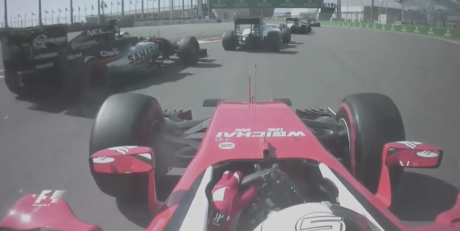 Vettel by now is slow on exit of T2, fumbling the wheel he bounces over the left hand kerbing, which almost catches out Kvyat again with the two narrowly avoiding contact. 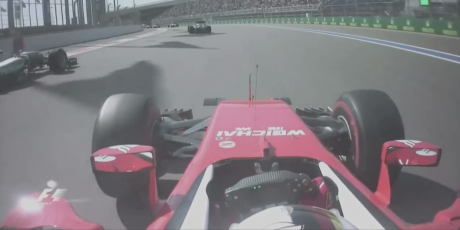 His slow exit from T2 means that there is by now a sizeable gap between the Ferrari of Vettel and the Force India of Sergio Perez. But as Vettel enters T3, Hamilton appears on his left, re-entering the track. Vettel gives him space but is swiftly around him.

Moving back to Kvyat, this is where his suggestions that Vettel slowed, and in so doing caused the collision, hold merit.

Turn 3 begins with the exit of T2, usually at around 155kph in 3rd gear. It seems Vettel has already had to snatch 2nd after being hit, thus helping create the less than optimal getaway. Putting the power down we hear his rear wheels spin, which at the time caused some audible suggestion of a problem at the rear and potential puncture. The video from fans in the grandstands appear to show Vettel’s car in adequate health and certainly there are no signs from Kvyat’s onboard of a problem with Vettel’s rear tyres. Indeed, Vettel quickly tempers the throttle and accelerates into the corner.

The first turn in at 3 is invariably carried at over 250kph in 6th gear, before accelerating to 7th and a top speed of 290kph before the braking zone at T4. It is a constant radius, constant acceleration zone.

Yet no sooner has Vettel cleared Hamilton’s Mercedes on his left, than the closing speed on Perez increases rapidly. The Force India twitches markedly and Vettel not only lifts but downshifts twice as he feels the Force India coming closer. Of course we now know that Perez was struggling with a rear right which was about to let go. This is what caused his twitch, his sudden loss of speed and in turn caused Vettel to back off.

Kvyat is still passing Hamilton at this point, and as the Ferrari slows suddenly ahead, the Russian tags his rear and spins him around. 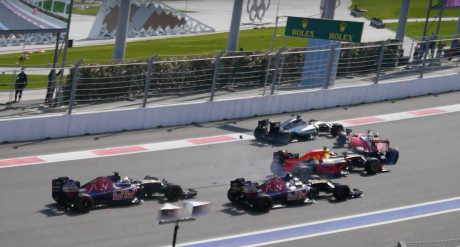 Hamilton is fortunate not to be collected by the spinning Ferrari, as is the rest of the field who pass by as Vettel ends up in the barriers and on the radio to the team to vent his anger.

(EDIT: Something that struck me last night when re-watching this video, look at the positioning of the Toro Rosso cars. If Kvyat slams on his brakes, he gets a Toro Rosso flying over him. If he moves to the right to avoid Vettel, he takes out the other Toro Rosso. The onboard video shows the gap between the slowing Vettel and Hamilton decreasing. If he moves left, chances are he takes them both out. With Vettel slowing rapidly ahead of him, he is essentially boxed in.)

The point in all this is that Kvyat’s hit on Vettel does not come out of some reckless decision to nerf him out of the way. Vettel is caught out by the twitch of the Force India and his own closing speed on a car which had, moments before, held at least three car lengths advantage over him. Running in close quarters behind, Kvyat has no time to react to Vettel’s sudden slowing and the result is the four-time champion’s exit.

In some ways, then, I can understand Dany Kvyat’s defense of his actions on Sunday. His mistake at Turn 2 was silly but we’ve seen far more grave mistakes at the first braking zone on the first lap of a Grand Prix. In the greater spectrum of driver errors, it really wasn’t huge. The knock on effects however combined quickly. The Perez puncture, the sudden need for Vettel to slow, and the karmaic positioning of Kvyat to be the one that collected him.

There’s a great line in Stanley Kubrick’s Full Metal Jacket – “Private Joker is silly and he’s ignorant but he’s got guts… and guts is enough.”

The same could be said of Dany Kvyat. 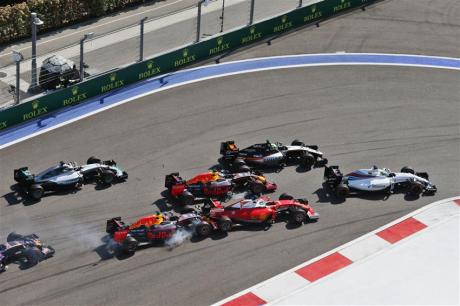 The moment that sparked it all
T2, Lap 1, Russian GP 2016
James Moy Photography

His move in T2 was silly. No more than that. But he wasn’t ignorant to that and accepted his mistake. His refusal to accept the blame for T3 however did seem, at the time, to be somewhat silly and ignorant. But my word does he have guts. And guts often is enough. He had guts to keep his nose in, but also, as it turns out, guts to stand up for himself after the race and say what he did about the circumstances of T3Because he was right! Vettel did slow dramatically. And he was caught out by it. There is simply no way that a driver, on the first lap of the race, in the middle of a corner taken at over 260kph and under constant acceleration could have anticipated the sudden slowing of the car ahead. It is the close quarters racing of an opening lap which so often creates contact. Thus has it ever been so.

Dany Kvyat made contact with Sebastian Vettel at Turn 3 on the first lap of the Russian Grand Prix in an incident which ultimately caused the Ferrari driver’s retirement. But there were mitigating factors.

That Kvyat was the architect of those factors is hard to argue. But it’s not the simple nerfing that many are trying to claim.